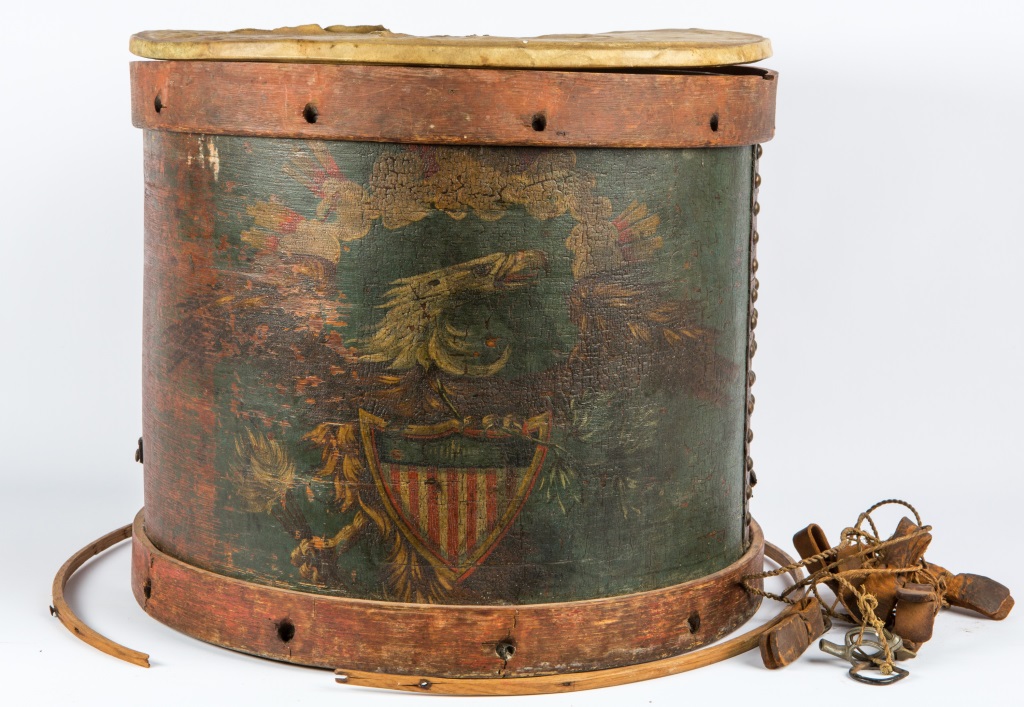 Mr. Windle served as a civilian volunteer. The drummer was from Coatesville PA and was known to Mr. Windle so he had the body wrapped and delivered to the family and kept the drum as a remembrance. The painted drum shows the Federal Eagle and has a brass rivet designs. The drum is also accompanied by signed letter of provenance from Charles Pennock Jr.

The drum measures 14" and, although disassembled the drum is in good condition with original ropes and hardware. Interior also shows several repairs.

This Civil War Drum is part of the Pennock Family Collection, whcih offers family items spanning 3 generations. You can read more about the Pennock Collection on the news page.

More details can be found at the March 2015 Militaria & Firearm sale page.

Provenance: Pennock Family Militaria, Arms & Ephemera Collection. Coatesville, PA. The March 2015 Auction brings to market items belonging to Thomas Hayes Windle (1833-1907), Charles Adrian Pennock Sr. (1892-1985), and Charles Adrian Pennock Jr. (1950 - ). The Pennocks trace their Coatesville roots to 1701, when Joseph Pennock settled a large tract of land in West Marlboro, just South of Coatesville. The land had been granted by William Penn to George Collett, Joseph’s Grandfather. Joseph Inherited the land from his father, Christopher Pennock. The civic activities and business acumen of the Pennock family forged an everlasting bond, connecting the family to the growth, development, and success of Coatesville and the surrounding area. Throughout Coatesville, many of the historic markers and buildings are associated with the Pennock family. A more comprehensive Pennock Family history is available on request. Thomas Hayes Windle (1833-1907) Musician in the 97th Pennsylvania Regiment. Wounded and returned home to Coatesville in 1862. After returning home he joined other civilians in providing support, supplies and services to Union forces fighting at Gettysburg. Mustered as a Corporal with Myer’s Independent Pennsylvania Civilian Cavalry in 1863. Following the war, Windle was active politically in the “iron town” of Coatesville, an inventor (patents on tools and beehives), and successful in the hardware business. Maternal Grandfather of Charles Adrian Pennock Sr.

The following is a LiveAuctioneers "The Daily Bid" Highlight Video, featuring the Civil War Drum from the Pennock Family Collection sold with Centurion Auctions:

Considering selling U.S. Civil War military memorabilia? Contact Centurion Auctions for a complimentary evaluation of your Civil War wartime militaria. Centurion is a national leader in the acquisition, marketing and sale of firearms and wartime military collectibles. Whether you are selling a large Civil War collection or a single piece of Civil War memorabilia. Centurion travels nationally and offers the best commission rates in the industry, excellent service, guaranteed price results and an unparalleled marketing and sales platform. Submit your inquiry online today.