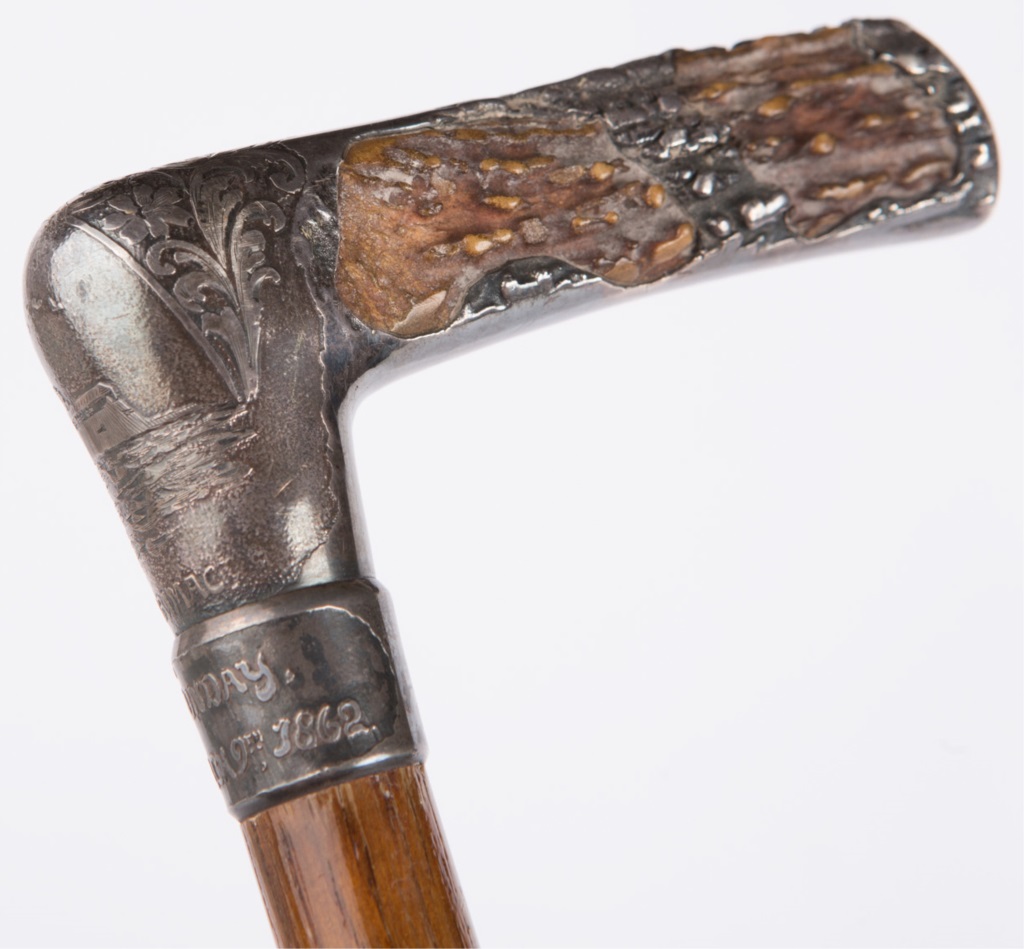 This is a wonderful historical Civil War Commemorative item and would make an excellent addition to any Civil War Collection.

The cane measures 35" and is in excellent condition.

The Civil War Merrimac Commemorative Battle of Hampton Roads Cane is selling as lot 13271 of Centurion Auctions October 15th 2015 Militaria & Firearm Auction. Lot and auction details can be found at the Auction Page. The auction is open to the public and everyone is welcome to bid. Bidders may participate by Floor, Telephone, Absentee, and Internet Bidding.

Considering selling Civil War Wartime Military Memorabilia? Contact Centurion Auctions for a complimentary evaluation of your Civil War memorabilia. Centurion is a national leader in the acquisition, marketing and sale of firearms and military collectibles / artifacts. Whether you are selling a significant Civil War collection or a single artifact from the Civil War. Centurion travels nationally and offers the best commission rates in the industry, excellent service, guaranteed price results and an unparalleled marketing and sales platform. Submit your inquiry online today.

About the Battle of Hampton Roads: 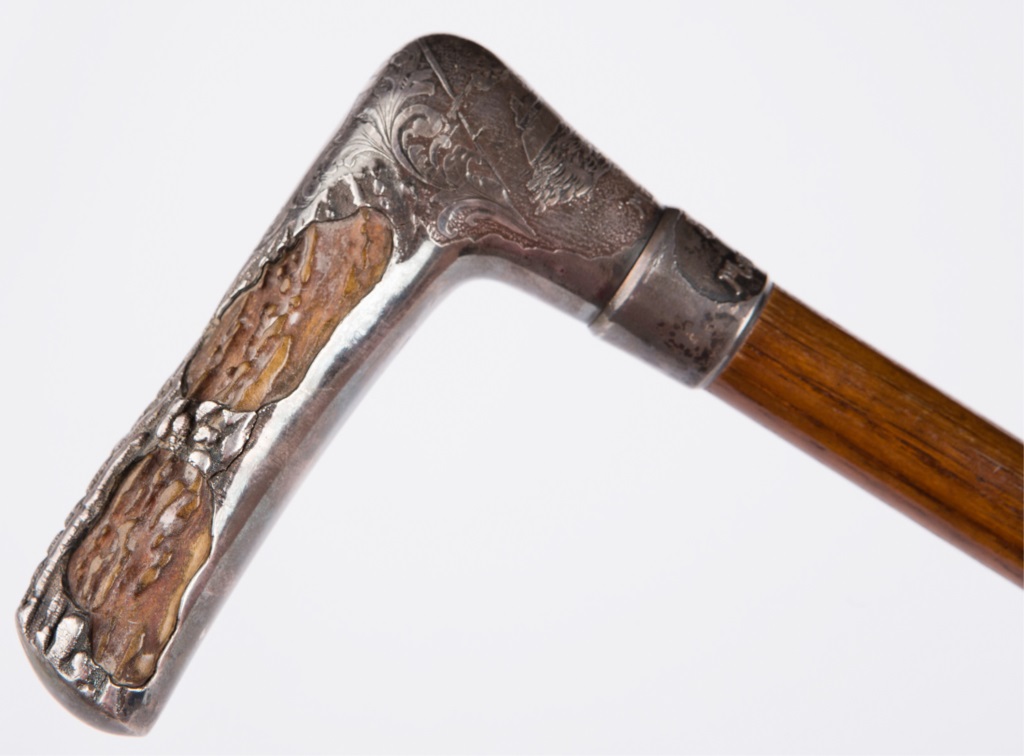 standpoint of the development of navies. It was fought over two days, March 8–9, 1862, in Hampton Roads, a roadstead in Virginia where the Elizabeth and Nansemond Rivers meet the James River just before it enters Chesapeake Bay adjacent to the city of Norfolk. The battle was a part of the effort of the Confederacy to break the Union blockade, which had cut off Virginia's largest cities, Norfolk and Richmond, from international trade.

The major significance of the battle is that it was the first meeting in combat of ironclad warships, i.e. the USS Monitor and the CSS Virginia. The Confederate fleet consisted of the ironclad ram Virginia (built from the remnants of the USS Merrimack) and several supporting vessels. On the first day of battle, they were opposed by several conventional, wooden-hulled ships of the Union Navy. On that day, Virginia was able to destroy two ships of the Federal flotilla, USS Congress and USS Cumberland, and was about to attack a third, USS Minnesota, which had run aground. However, the action was halted by darkness and falling tide, so Virginia retired to take care of her few wounded — which included her captain, Flag Officer Franklin Buchanan — and repair her minimal battle damage.

Determined to complete the destruction of the Minnesota, Catesby ap Roger Jones, acting as captain in Buchanan's 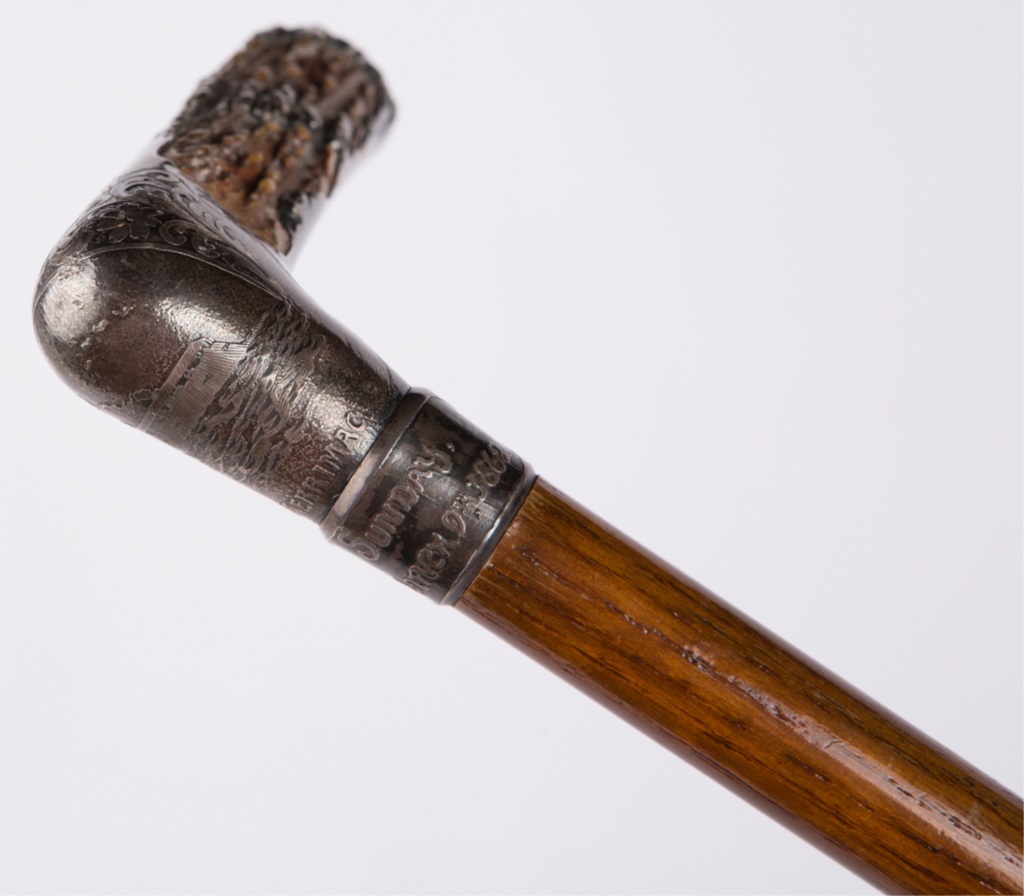 absence, returned the ship to the fray the next morning, March 9. During the night, however, the ironclad Monitor had arrived and had taken a position to defend Minnesota. When Virginia approached, Monitor intercepted her. The two ironclads fought for about three hours, with neither being able to inflict significant damage on the other. The duel ended indecisively, Virginia returning to her home at the Gosport Navy Yard for repairs and strengthening, and Monitor to her station defending Minnesota. The ships did not fight again, and the blockade remained in place.

The battle received worldwide attention, and it had immediate effects on navies around the world. The preeminent naval powers, Great Britain and France, halted further construction of wooden-hulled ships, and others followed suit. A new type of warship was produced, the monitor, based on the principle of the original. The use of a small number of very heavy guns, mounted so that they could fire in all directions was first demonstrated by Monitor but soon became standard in warships of all types. Shipbuilders also incorporated rams into the designs of warship hulls for the rest of the century.

Read more on this famous battle