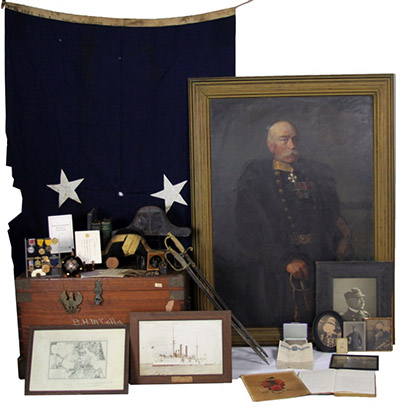 This archive was acquired / Acquired by consignor, directly from the Great-Grandson of Admiral McCalla. The consignor purchased this archive in 1991, as McCalla’s Great-Grandson was selling off many of the items he had inherited upon the passing of his mother.

This public auction is open to everyone. Those interested may register and participate by floor, live telephone, Internet or absentee bidding. Please visit the February 27th 2016 Auction page for Details and Registration information. Please contact the gallery if you have any questions related to the Archive of Admiral McCalla or the auction.

Admiral Bowman H. McCalla (June 19th, 1844 - May 6th, 1910) is known to have been a focused, driven, courageous, and respected leader. His biography describes him as a "Fighting Sailor". McCalla was a go-to officer, who could always be trusted and relied upon to accomplish the mission. And as an Officer who would bravely lead his men in to any situation.

From his initial appointment as a Naval Midshipmen in 1831 to his retirement in 1906, McCalla served a long, distinguished Naval career. One in which he would be tasked with critical military roles in most conflicts of his time.

In the spring of 1885, during the Panama crisis of 1885, McCalla led an expeditionary force of 750 seamen and marines which landed at Panamato protect American treaty rights when the revolution there threatened to block transit across the isthmus.

As commanding officer of USS Marblehead, September 11, 1897 to September 16, 1898, he took part in the blockade of Cuba and was responsible for the cutting of submarine cables linking Cienfuegos with the outside world, thus isolating the Spanish garrison there, in May 1898. In June 1898, he led the invasion of Guantánamo Bay. To this day, McCalla Hill, near Guantanamo Bay is named for Admiral McCalla.

While in command of Newark during the Boxer Rebellion two years later, he was cited for conspicuous gallantry in battle as he led a force of sailors from Tientsinto Peking. McCalla's force of 112 men spearheaded an international column, under British Admiral Sir Edward Seymour, which was attempting to fight its way to the aid of foreign legations under siege at Peking. In the course of the battle at Hsiku Arsenal, McCalla, along with 25 of his force, was wounded; five were killed.

On April 18th, 1906 a magnitude 7.8 earthquake struck the coast of California. The quake destroyed more than 80% of San Francisco, crippling the city and causing panic among the people. At this time, McCalla was Commanding Officer at Mare Island Naval Station. McCalla, along with other military leaders near this horrific event, realized this was a dire situation and thousands were in immediate need of assistance, they assumed complete control of San Francisco. Together, they spearheaded the relief efforts and restored order to a city in chaos.

McCalla fell ill and passed away suddenly at his home in Santa Barbara, CA on May 6th 1910, with his wife Elizabeth and 3 daughters at his side. He was cremated and buried at Arlington National Cemetery.

His biography, "Bowman Hendry McCalla: Fighting Sailor", written in 1979 by Paolo Enrico Coletta and available for purchase on Amazon.

Considering selling an important collection of wartime militaria? Contact Centurion Auctions for a complimentary evaluation. Centurion is a national leader in the appraisal, valuation, acquisition, marketing, and sale of important firearms and wartime military memorabilia. Whether you are selling a large firearm collection or a single piece of war memorabilia. Centurion travels nationally and offers generous commission rates, excellent service, guaranteed price results, and an unparalleled marketing and sales platform. Complimentary nationwide pick up and transport of firearm collections and militaria collections.