A very significant and extensive grouping of WWII Normandy D-Day Invasion Items, consigned by the Family of D-Day Veteran - United States Navy LT. Henry L. Oakes (August 13, 1900 - November 23, 1973). Oakes was one of the oldest of the Allied Forces to take part in the D-Day Invasion (D-Day 11th Amphibious Force). During his WWII Service, Oakes was awarded 4 Purple Hearts (2 of which are from action in Normandy France) and a Bronze Star. All items within this lot have been in the possession the family since being brought back by Oakes. All were maintained within the Original Military Trunk of Oakes.

- WWII D-Day Flown Flag of LST 314 (Landing Ship Tank) - Omaha Beach (Red), Invasion of Normandy. This 48 Star Ensign was flown aboard LST 314 on June 6th, 1944 as it took part in Omaha Beach (Red) Operations during the invasion of Normandy (D-Day). It was recovered and kept by Lt. Oakes as he took part in D-Day Operations. Written in black ink (albeit exhibiting some fading, but clearly discernible / legible) by the hand of Lt. Oakes, to Heading of the flag itself, is the following wording: "6th June - 44 LST 314 Red, Beach Normandy, France." Oakes stated to his Family, having removed this flag from LST 314 and then utilizing the flag on the beach to establish a make-shift command post for follow-on beach operations. Following D-Day, Oakes spent weeks on the Beaches of Normandy, where he oversaw varying Beach Operations.

LST 314 was subsequently sunk by German torpedoes on the evening of June 9th, 1944

- Personal Effects of Oakes. All of these items were verbally stated by Oakes to have been used / worn by him personally on D-Day and then in immediate follow-on Beach Operations:

**Bag Note - Canvas Bag: Written in black ink, inside the top flap of the canvas bag, by the hand of Lt. Oakes is his timeline of WWII Service. The timeline is in chronological order and written as follows:

It is also worth noting, the family was in possession of the painted invasion stripe WWII D-Day Worn Helmet of Lt. Oakes (the same helmet he is pictured wearing in the included Normandy Beach photos & in the photo of his son), but they regrettably sold it a few years back. We have images of the helmet, and there are images of the D-Day helmet belonging to Oakes available by way of an internet search as the buyer later posted it for sale.

The Allied Invasion of Normandy on June 6th, 1944 (D-Day), involved nearly 160,000 Allied Troops (half of whom were American). The D-Day Invasion, and the sacrifice of those involved, signaled a turning point in the WWII European theater, and contributed largely to the defeat of Germany.

Only a handful of legitimate D-Day flown flags are known to exist in the market. As such, this grouping, to have the D-Day Flown Flag and the Archive / Personal Items of Oakes makes for an exceptional opportunity to own an incredible piece of history. The depth and comprehensive nature of this grouping is remarkable.

All items in this lot are consigned by the family of LT. Henry Lewis Oakes. All has been in direct possession of the family since being brought back by Oakes. Also included, from the the Consignor, is a signed & Notarized Statement of Authenticity.

Please select this link to visit the detailed online photo gallery of this WWII D-Day Invasion Lot. The photo gallery displays 140 images, to reflect all of the items and material included with this lot.

Centurion Auctions is the industry leader in the valuation, marketing, and sale of historically important military collectibles, documents, arms, and firearms. Centurion conducts quarterly speciality auctions in both Firearms and Wartime Military Collectibles. Firearm auctions are focused purely on antique, modern, military firearms, and machine guns. Wartime Military Collectible auctions center on medals, awards, edged weapons, cloth, headgear, uniforms, gear, and the like. Each auction is comprised of consignments from around the globe, to include individuals, dealers, trusts, estates, and life-long collections. 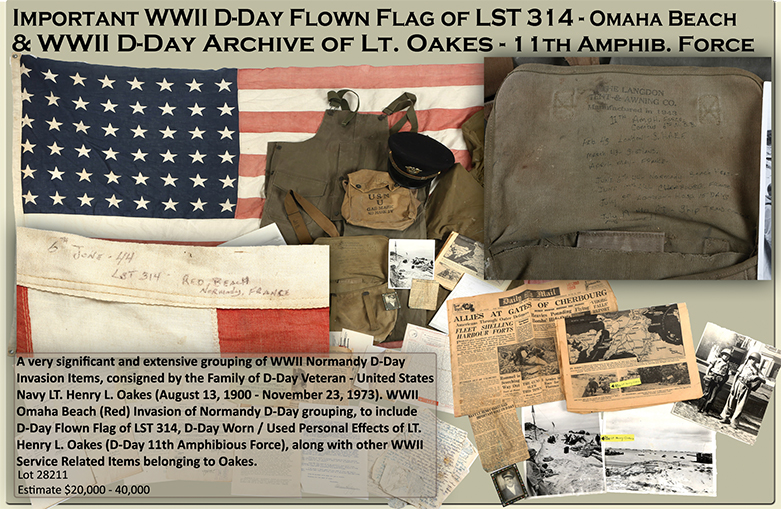