from World War I / WWI, World War 2 / WWII, Korea, Vietnam & Gulf Wars, to include U.S., German, Japanese & British Aviation and War Collectibles. The Rees Collection is scheduled for auction on July 8th, 2019. The auction is open to all interested parties. Bidders are able to bid from the floor, Internet (live real-time & absentee pre-bid), telephone, and absentee. The online catalog is available to preview, register & bid now. This auction will be held at the Centurion headquarters in Tallahassee, Florida.

The following is the story of Spence Rees, as shared by his family.......

I’ll begin by saying Spence’s obsession for military aviation began in his early childhood and continued throughout his entire life. His collection was truly a life’s passion and brought great joy to him and many others.

Spencer was only 17 years old when he enlisted in the Air Force; he was a ground crew leader for a F-86D “Dog Sabre”. After an honorable discharge he spent most of his life as an engineer, designing power tools. Spence exhibited great attention to detail and an extraordinary work ethic, which served him well in both his career and hobby. He was very talented and well-versed in history and military knowledge, and this fostered his hobby. According to his mother, he built his first model airplane at age 6. Upon completing the model, he decided it didn’t look exactly how he wanted, and thus he destroyed it (a perfectionist in the making). His childhood bedroom was covered with American, German and Japanese aircraft in dog fight scenarios. Of course, the Americans were always winning and the “bad guys” would end up in flames created from painted cotton balls and appropriately glued to the losing aircraft.

Spence received his first military collectible, a WWII aircraft gun sight, as a birthday gift from his wife, Mary Ann, when he was in his early 40’s. This gift was the catalyst and his hobby intensified from there. Many weekends were spent at flea markets, army surplus stores, and gun shows. Much to his 2 daughters’ disappointment it even meant family vacations to air museums.

Spence wanted to help people understand the importance of saving the history of WWII. He spent an enormous amount of time researching each new addition to his collection prior to restoring it to pristine condition. He was very much a detail oriented perfectionist.

At some point, Spence decided to try something a little different, he wanted to scratch build large models. His first project was a Japanese Zero. If you are Spencer, what’s the best source to get information on the 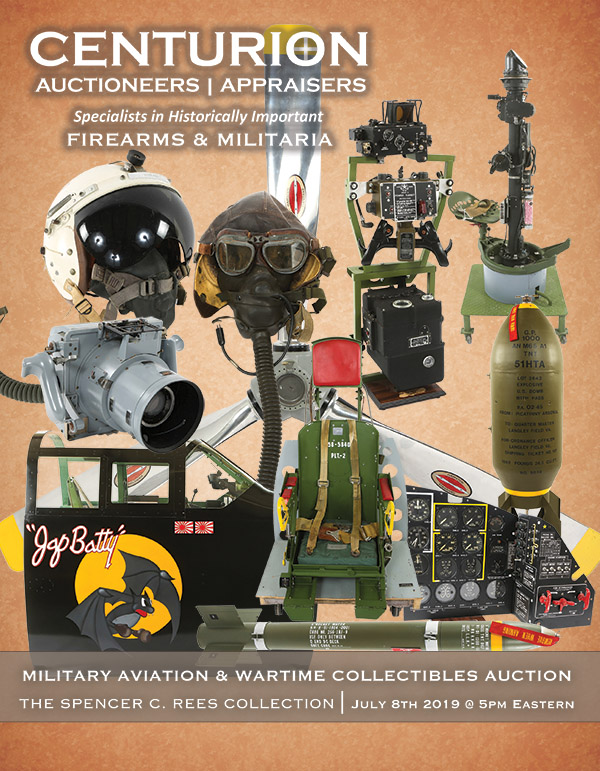 Military Aviation Collectibles of Spencer Rees Collection Japanese Zero? The Smithsonian! So he went to the Smithsonian, spoke with the curator, and explained what he was trying to do. The museum let him in before it opened, and he took the measurements he needed. Once he was home, he made a scale drawing and built the tail section of the Zero in his basement. With another considerable model endeavor, he built a complete full-scale cockpit for a Black Widow (P-61) the “Jap Batty” (avail in auction). While building this model, it was brought to this attention by Mary Ann that the model was too big to fit up the stairs and would be stuck in the basement. His response to Mary Ann’s concern was that he was going to remove a basement wall! The look on her face must have scared him, as he quickly advised her he was kidding. He had built the model so that it could be disassembled with of course 4 pages of explicit detail on how one was to execute disassembly. The interior of Jap Batty was outfitted with the gauges, seats, down to every detail the plane would have had, and yes, this includes the urination tube under the seat. Spence had met a couple of pilots who had flown the P-61 and collaborated with them to make certain every detail was accounted for and the model was flawless. Once Jap Batty was complete, the collaborative pilots came to the house and autographed the back of the pilot seat within the model.

Spence’s world changed once he discovered how to use the internet. A wealth of information right there on his laptop computer. He began to research the aircraft carrier “USS Gambier Bay”. He read the book “The Men of the Gambier Bay”. He liked the idea of a real ship with a real story. He found a set of plans on the internet and made an 8’ scale drawing. From his drawing, he started building it. Like most modelers he was very inventive with the material he used to make the guns, antennas, fire extinguishers, life rings, and any and all equipment that would be on that aircraft carrier. For one example, the guns mounted on the ship are about 1-2 inches in size and are comprised of 94 tiny pieces, which he made by hand. The only objects on the model he did not make by hand are the airplanes on the deck of the carrier. The Gambier Bay took him 3 years to build and was his last model (avail in auction).

As Spence’s hunt for the perfect “treasure” continued, his collection grew to a few thousand pieces, he decided he needed a larger space to house and display his collection. He constructed an out building in his backyard. Although it was an outbuilding or pole building, you would be corrected if you called it anything other than a hangar. “It has an airplane in it, IT’S A HANGER”. The hanger was about 5000 sq. ft. and became the ultimate man cave, with large screen TV, comfy couches, chairs, fridge, bar, snacks, coffee pot, and the entirety of his collection.

Spence was an unbelievably talented person with a great gift and passion for his collection, which he came to name “The Eagles Nest”. Many people came through and looked at his collection. A simple question such as “What is that?” became a lengthy and well-informed history lesson. Spence held gatherings for all sorts of people, ranging from WWII pilots to interested teens. Each visitor came away with the same comments, “That is amazing”.

Hopefully his collection will live on and inspire a new generation of collectors. Spence’s family prays that the new owners of his treasures will love and respect the items and the history they represent as much as he did.

Visit the auction details page for sale details, terms, and bidding in the Military Aviation & Wartime Collectible Auction for the Spence Rees Collection

Selling a wartime memorabilia collection? Centurion Auctions is the industry leader in the appraisal, valuation, marketing, and sale of historically important military collections, collectibles, documents, arms, and firearms. Centurion conducts regular specialty auctions in both Firearms and Wartime Military Collectibles. Firearm auctions are focused purely on antique, modern, military firearms, and machine guns. Wartime Military Collectible auctions center on medals, awards, edged weapons, cloth, headgear, uniforms, gear, and the like. Each auction is comprised of consignments from around the globe, to include individuals, dealers, trusts, estates, museums, and life-long collections.