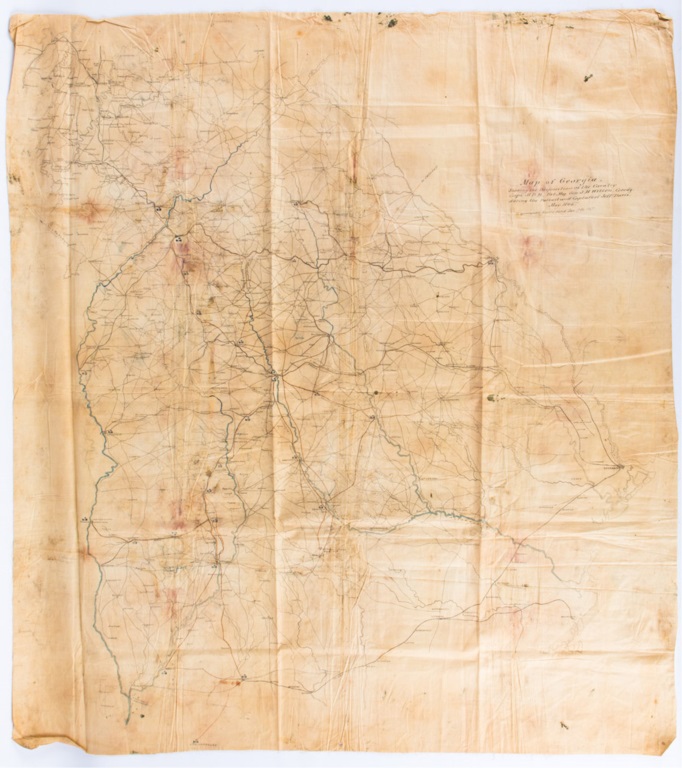 Historically important Jefferson Davis Civil War Pursuit & Capture Map has been lost for the past 150 years, only recently seeing the light of day when the map was discovered hidden away, in among a private Civil War Book Collection. This linen Map of Georgia depicts the Disposition of the Cavalry Corps, M.D.M., Bvt. Maj. Gen. J. H. Wilson, Comdg. During the Pursuit and Capture of Jeff. Davis. May 1865.

The map is partially printed and partially hand drawn, showing the position and movements of the troops pursuing Jefferson Davis as he moved about to elude capture by Union troops. This Capture Map was to accompany General Wilson’s January 17th, 1867 Report to Congress, although the report notes the map as “Not Found”. The Jefferson Davis Capture Map is of great historical importance and a truly exciting find. It is consigned to sell with Centurion Auctions as part of the May 28th Civil War Era Militaria Auction. Having been missing the last 150 years, the map is fresh to the market, and expected to generate substantial interest within the Civil War, Rare Book, Map, and Document Collecting Communities.

The May 2016 Militaria & Military Collector Auction is open to everyone. The Jeff Davis Capture Map is being offered as sale lot 17106. The auction begins at 1pm EDT and will take place at the Centurion Auction Gallery in Tallahassee, FL. Bidders are able to bid from the floor, live by telephone, live by Internet, and by absentee / pre-bid. Questions about the Map or Auction, please call the gallery at 386-868-2889 or Contact Online.

Historically significant unrecorded map with handwritten additions and notes Detailing the Pursuit and Capture of Jefferson Davis. Original linen Map of Georgia. In his January 17, 1867 report to Congress on the pursuit and capture of Jefferson Davis, J. H. Wilson, Bvt. Maj.Gen. U.S. Army, concluded his report “I transmit herewith a map showing the railroads, rivers and important points mentioned in this report, and from which the movements and dispositions of the troops under my command may be fully understood.” Following the report is the notation “*Map not found.”

Well, some 150 years after the pursuit and capture of Davis the map had been found. It is on linen, 32 inches wide by 35 inches in length, labeled in a fine hand “Map of Georgia, Showing the Disposition of the Cavalry Corps, M.D.M., Bvt. Maj. Gen. J. H. Wilson, Comdg. During the Pursuit and Capture of Jeff. Davis. May 1865. To accompany Report dated Jan. 17, 1867.” The map is partially printed, partially drawn by hand, the movement and dispatch of the troops pursuing Davis are drawn in detail concluding with the penned note “Jeff Davis captured May 10, 1865.”

Also included with the Map:

3.        Senate 39th Congress, 1st Session Ex. Doc. No. 6?. Letter of the Secretary of War communicating In compliance with a resolution of the Senate of the 24th ultimo, the evidence upon which the awards for the apprehension of Jefferson Davis were made. April 30, 1866. 39 pages.

Provenance: For more than 40 years, Broadfoot Publishing has been engaged in the business of buying and selling rare military books. Within the normal course of business, they purchase large rare military book collections. This map was purchased in a collection some years ago. It was only recently discovered within a small box, in among a Civil War book collection. In the box, the map was folded and found with the 14-page House of Representatives Bill No. 1277 dated June 17, 1868 entitled “Capture of Jefferson Davis” (also included with this lot). Over the years, Broadfoot has purchased thousands of book collections, thus is would be nearly impossible to determine the collection from which the map originated. The map is consigned through Broadfoot Publishing.

Selling Military Wartime Maps or Documents? Centurion Auctions specializes in the acquisition, valuation, appraisal, marketing, and sale of historically important military maps from the U.S. Civil War, WWI, WWII, and all other military conflicts. Contact Centurion Auctions for a complimentary evaluation. Whether you are selling a large collection of military maps or a single piece of wartime memorabilia, we can help. Centurion offers the best commission rates in the industry, excellent service, guaranteed price results, an unparalleled marketing and sales platform, and travels nationally to pick up and transport consigned militaria and firearm collections.